BRILLIANT
Posted by Rich Martini at Thursday, December 16, 2021 No comments:

A public service announcement. CTE can be cured by hyperbaric oxygen therapy. That factoid comes from some mind bending interviews with people who suffered from it and are on the flipside, including Dave Duerson and Junior Seau.

The film (free on Youtube) "Talking to Paul Allen, Junior Seau and Dave Duerson" details how they "came through" to report the information that Joe Namath has "cured his CTE" by using hyperbaric oxygen therapy. As odd as it is to hear this from this odd research, it's a public service announcement. If you don't believe the message came from the flipside, that's fine - the important part is the message. Science can cure CTE with the use of hyperbaric oxygen therapy.

If you disagree, don't believe, or want to learn more, do the research into the topic. Look up Joe Namath's story, which he's tried to tell people, but ran into a wall of disbelief. He stopped saying that he believed it cured him, but the cat is out of the bag. People on the flipside know it cured him, and wanted us to report it. Will post a link to the film below. PSA.

A former US football player who police say shot dead six people in April has been found to have been suffering from a degenerative brain disease.

A post-mortem on Phillip Adams, who took his own life, revealed he had chronic traumatic encephalopathy.

Known as CTE, the disease is linked to repeated head trauma.

The 32-year-old later killed himself after a stand-off with police in South Carolina."

Posted by Rich Martini at Tuesday, December 14, 2021 No comments:

My wife Sherry came across this symbol yesterday. 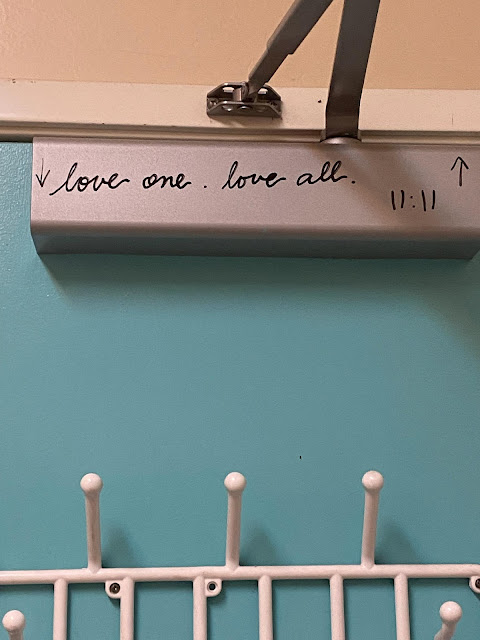 I liked seeing it in this context. My wife was the one who had the dream where she saw an old friend who died 20 years ago come to her and say something to her on a topic she was worried about. But my wife, ever the skeptic, said “Wait a second. You died 20 years ago. How can you be here now?”

When she woke up she asked me about it. I said “Think of the colon (ratio) symbol as a fence - on one side is the letter 11 which represents a hallway, and on the other side, another hallway. They have to slow down their frequency to speak or send us images, and we have to speed up ours in a dream, meditation or some other fashion to hear or see what they’re saying.”

Mediums don’t have that issue - as they are already seeing or hearing what they’re saying (and hopefully interpreting it correctly.)

But this symbol ↑↓11:11 epitomizes the idea of “so as above, so as below.” Meaning we’re on two sides of a realm, or a frequency, we can’t see it, hear it, know it - but when we cross over, we change the channel the way old TVs used to change between stations. We slip into the “thought frequency” or the “mind realm” - leaving the sense realm.

My wife also had a dream where she was speaking to the physicist Mino (she was reading a book about him at the time.) In the dream he said “All light is both particle and wave. When I was on the earth, my experience was more particle, now that I’m not it’s more wave.”

Two parts of the same coin. As above, so below.

If I could copyright it I would:

Posted by Rich Martini at Sunday, December 12, 2021 No comments: