Friend and mentor Charles Grodin has been doing hilarious, insightful commentary on CBS radio in NY for awhile now.  Could it be ten years?  Maybe more.  I've had the privilege of knowing Chuck for about 30 years now, and every time I talk to him on the phone or see him in person, I come away feeling lighter, more energized, seeing the world in a different fashion.  He's got a unique vision, and is hilarious as well.  Here's a link to his website in NYC.

You'll hear the past two months of his commentaries about life in the city, life in the country, and life in general. Enjoy!

Here's a picture I found recently, taken on the set of "Movers & Shakers" - Charles invited me to be the dialog coach on the set - meaning I got to spend time helping actors rehearse their lines.  Walter Matthau had an amazing memory, and could memorize huge sections of text in a few hours - his secret was that he recorded all the lines on a tape recorder and kept it playing around the house.  So in this case, I was his tape recorder, and would follow him around on the set, helping him with his lines. What a delight. 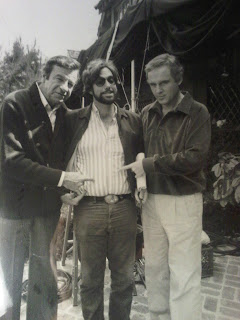 Anyways, here's the picture, with the gentlemen pointing out I've spent too much time around the craft table.  Enjoy Chuck's commentaries above!
Posted by Rich Martini at Tuesday, February 15, 2011 No comments: