Martini On The Rocks

I finally decided to take the tracks out of my closet and put them into a CD... I've been playing Chicago Blues and Boogie Woogie Piano for longer than I can remember, frequently in some piano bar in some far corner of the world.  Over the years, people would ask me if I had a CD, and I would chuckle and say CD? Moi? I played alongside Craig Cole at Les Deux in Hollywood for six months, played with Imminent Disaster Blues Band in LA in various venues around town including Les Deux, and the House of Blues.  A damn fine band. There are various tunes I've written over the years as well as some covers, like "Route 66."  Enjoy.
Martini On The Rocks at CDBaby.com 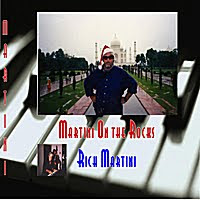