Charles Grodin's paean to yours truly...

I got an email from the amazing, hilarious, loyal pal Charles Grodin the other day. When he's not writing plays, starring in films, directing/producing/emceeing, he's saving people in prison who've been incarcerated under bizarre circumstances.  He's an all around amazing guy, and happens to be Godfather to my son.  That being said, I was a bit flabbergasted to read this - which will be posted in his weekly column at the NY Daily News (as of today, they've held it up, perhaps thinking it was about broadway musical producer Richard Martini).  I post it here, because after I read it, I swore I was going to tattoo it to my forehead. In lieu of my forehead; Enjoy.

(PS. His daughter Marion is a brilliant standup commedienne, son Nicholas (on the left) is a terrific actor and has appeared in a number of cool feature films and wife Elissa is an accomplished children's book author. Talk about a tour de force de family...  Look for Chuck to appear in the sequel to Midnight Run, (knock on wood) and he appears on the radio doing hilarious and often touching commentary on your local CBS radio affiliate...)

Richard Martini is so gifted in so many ways – writing – directing – producing – but he has no greater gift than being a devoted friend. When my wife and son wanted to go to Italy, I knew I wasn’t going anywhere except maybe downstairs, so I asked Richard Martini to accompany them – Italy – Martini – hellooo.

He even flew to Africa to be with me ,where I once did a picture.  He got a discount for me on a fabulous rug – two actually.

Recently we were discussing all the distracting DVDs that are now available for cars.  Richard said “We have a great DVD in our car.  It’s called a window.”

Just a few words here in praise of "Salt." 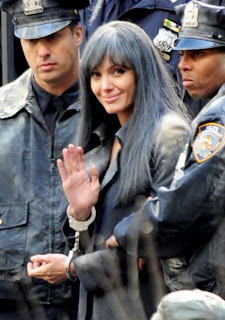 I had the great opportunity to work on this film the past year.. I created a previsualization site where everyone on the cast and crew could view the Director's Vision on a daily basis - Phillip Noyce would ask me to search things out for him, and I'd post them daily on this web page.  There was character background info for the actors, links to the story boards, clips of all the locations and just about everything that could go into a film appeared on this one page.  I'd update it every day so that all the crew members were on the same page as Phillip.  Then one day he handed me a digital camera and asked me to shoot some flashback sequences for him - not sure if any will actually make the final cut, but during the editorial process, it was hilarious to see the footage I shot on a Sony HD cam show up on the big screen.  Oh, and I also appear in the film - look for me as a driver for Evelyn Salt when she is brought out of North Korea. I nearly killed my precious cargo when I nearly turned into a huge army truck during the shot, but it was fun speeding around with August Diehl, who plays Salt's husband. 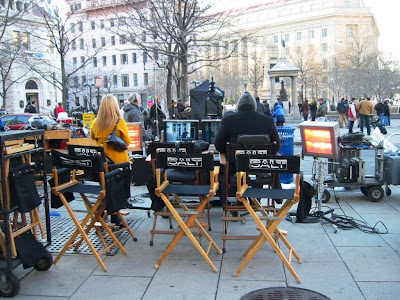 I've seen a rough cut of the film and it jumps off the screen.  Phillip is really a master of this genre, and knows how to take something and amp it up without losing story focus, or what the emotional impact might be. And I can't praise Angelina Jolie enough - I was startled by her ability to nail each scene over and over again, under sometimes bizarre circumstances, while flying, jumping, leaping, kicking or doing all the stuff that she does really well.  It's the first time I'm aware of that she's able to play an action character with multiple levels of personality - in this case, I felt she captured a certain kind of schizophrenia that is written into her character, and I'm amazed at her multiple personas.  A tour de force, or a force majeure, or a force of nature.  Take your pic. Oh, and Liev Schreiber rocks as well.  Another amazing actor who gives nuance a new name.

This is not a movie review, nor is it trying to sell the film in any way.  I think anyone who goes to see it will get a thrill ride out of it, and it always keeps you guessing.  The acting is top drawer, the action isn't over the top, and the story leaves you trying to add up the clues - they're all there, but may require subsequent viewings to nail them all.  Oh, and of course, to catch me on screen.
Posted by Rich Martini at Thursday, May 06, 2010 No comments:

Looks like I won't be teaching at the Rome Center this summer after all.... La Prossima!
Posted by Rich Martini at Thursday, May 06, 2010 No comments: