Charles Grodin's book: "If I Only Knew Then" 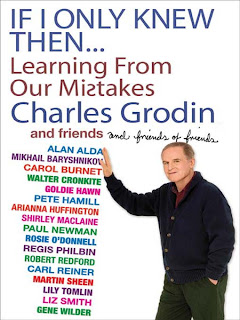 One of many essays in a book about learning from mistakes, yours truly has an essay in this one.

I also helped Sally Kellerman and Robert Towne craft their essays - in the former case, Sally told me the story over lunch at a local eatery in Santa Monica, in Robert's case I went to his house with my laptop and had him tell me the story so I could type it up for him. Essentially they both edited them into the stories that appear in the book, but are hilarious nonetheless.

A perfect gift for your family - who make a lot of mistakes, don't they?

If I Only Knew Then
Posted by Rich Martini at Wednesday, January 02, 2008 No comments:

Hockenberry Vs Zucker - who do you believe?

NEW YORK (Hollywood Reporter) - A former "Dateline NBC" correspondent claims that in the aftermath of September 11, the network diverted him from reporting on al Qaeda and instead wanted him to ride along with the country's "forgotten heroes," firefighters.

John Hockenberry, who was laid off from "Dateline" in early 2005, wrote in this month's Technology Review that on the Sunday after the September 2001 attacks he was pitching stories on the origins of al Qaeda and Islamic fundamentalism. He claimed that then-NBC programming chief Jeff Zucker, who came into a meeting Hockenberry was having with "Dateline" executive producer David Corvo, said "Dateline" should instead focus on the firefighters and perhaps ride along with them a la "Cops," the Fox reality series.

According to Hockenberry, Zucker said "that he had no time for any subtitled interviews with jihadists raging about Palestine."

NBC News wasn't impressed by this or any of Hockenberry's other claims.

"It's unfortunate that John Hockenberry seems to be so far out of touch with reality," an NBC spokesperson said. "The comments are so utterly absurd, we will have no further comment." Another NBC executive said it didn't sound like Zucker, who was promoted out of the news division and was at one time "Today" executive producer.

Hockenberry is a distinguished fellow at the MIT Media Lab in Cambridge, Mass. But for more than 20 years, he was a broadcast journalist working at National Public Radio, ABC News and from 1996-2005, a correspondent at "Dateline." Hockenberry's blistering article trained much of its fire on the controversial NBC newsmagazine, which has been criticized for its "To Catch a Predator" series -- a "highly rated pile of programming debris," in Hockenberry's words.

In another instance, Hockenberry claimed a story he did about a Weather Underground member wouldn't appear on the Sunday edition of "Dateline" unless its lead-out, the 1960s family drama "American Dreams," did a show about "protesters or something." And for another story on the abuse of mentally ill inmates, Hockenberry was told by a producer that video of a fatal attack on a prisoner by guards wasn't enough.


Happy New Year. This year, can we all just speak a little truth to power? When the executive says "print the lies," we all say "no." When the programmer says "edit that story so it reaches the common denominator" we say "Sorry, can't do it." Or the story editor says "It's show business, not show art" we say "Is that what you tell your children at night?"

I love that NBC responds as if this award winning journalist is out of his head. Why didn't they just say "Look, the guy's in a wheel chair - he's off his rocker!!" Hockenberry is just pointing up the picky idiot things that those in power constantly asks people to do with their work. Instead of aiming for the truth, they aim for the bottom line - or the bottom of the barrel. The only way to say no to that is.. to say no.

Kudos to JH for speaking truth to power.