Tibetan Filmmaker sentenced to six years for his documentary

Zurich, 6. January 2010. Dhondup Wangchen, the Tibetan filmmaker who is currently in Chinese detention, has been sentenced to six years imprisonment by the provincial court in Xining (capital of Qinghai province). The sentencing took place on 28 December 2009 but his relatives in Xining were neither informed about the trial nor the verdict. 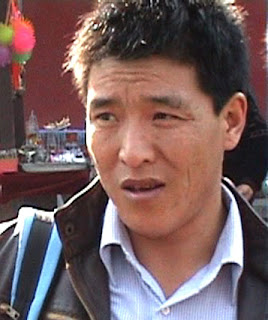 Outrageous!!!
This filmmaker made a documentary in Tibet and has been sentenced to six years in prison.

Write a letter, send a fax, to to the webset and watch the movie at http://www.leavingfearbehind.com/downloads.php
Here's my letter to the Minister of Justice:

It has come to my attention that an amateur filmmaker has been sentenced to six years in prison for making a film.  I've seen footage from his film "Leaving Fear Behind," and can see that he made a film without much more than his camera and computer. Since the proliferation of video cameras worldwide, anyone can take up a camera and point it in the direction of someone else and ask them a question.

Certainly the great country of China has it within their power to allow artists to take photographs, or paint pictures, or create music that reflects the times.  I've been to China a number of times, and am always amazed by the breadth, depth and mastery of Chinese artists.  The history of China is replete with artists and craftsmen making artwork that reflects their time in history.  I submit to you that a student asking his fellow citizens what they think of the upcoming Olympics (the 2008 Beijing Olympics) is not an act of sedition, rather it is a time capsule of feelings from the region.

Since China claims that Tibet has always been part of China, I find it ironic that the government doesn't treat their Tibetan brothers with the same dignity and expression that they might allow in their fellow artists in Shanghai or Hong Kong.  Certainly, a filmmaker like Chen Kaige has made films that reflect a time and a place - I submit to you that if China truly considers Tibet to be part of its heritage, then it should allow those artists and filmmakers, even if they're student filmmakers, to be allowed to express themselves.  No flags were burned. No posters were printed. No one was harmed by the telling of this story.  In fact, the opposite is true - its made the government of China appear weak, repressive and frightened by a student with a video camera.
(http://www.leavingfearbehind.com/index.php)

I sincerely hope the Justice system finds a way to right this wrong. Having spent time in Tibet, Shanhai and Beijing myself (as well as Hong Kong), it's apparent that the authorities in Tibet  act with a heavier hand then perhaps in other regions of China.  I will ask my fellow filmmakers here in the U.S. to lend their voices to help get this student (and the monk who assisted him) out of prison and home to his family.

Richard Martini
Documentary Filmmaker ("Journey Into Tibet")
Member of Director's Guild, Writer's Guild and Screen Actor's Guild (as if that would help!)

Anyways, with a concerted effort towards his release, we all were able to get Tibetan filmmaker Ngawang Choephel out of prison (letters to Amnesty Intl, people like Diana Takata with the Students for a Free Tibet, contributions from many people across the planet) - and he went on to win Sundance last year for his documentary!!!!

It's an amazing story - and at the very least write a letter to protest.. here's the details from his website:

PLEASE WRITE IMMEDIATELY in Mandarin or your own language,
calling on the Chinese authorities to:

> release Dhondup Wangchen immediately and unconditionally, as he has been detained solely for his peaceful exercise of the right to freedom of expression;

> guarantee that while he remains in custody, he is not tortured or otherwise ill-treated, and has access to family, legal assistance of his choosing and any medical care he may require;

> ensure that Dhondup Wangchen’s trial is in line with international fair trial standards;

> conduct a prompt and impartial investigation into the allegations that Dhondup Wangchen has been tortured and otherwise ill-treated, with a view to bringing those responsible to justice.

Also send copies to diplomatic representatives accredited to your country.
Posted by Rich Martini at Thursday, January 21, 2010 No comments: