A gift from a ghost

Today my wife was in a local restaurant where we've been going for eons. She said she glimpsed a photo on the wall and time suddenly shifted. 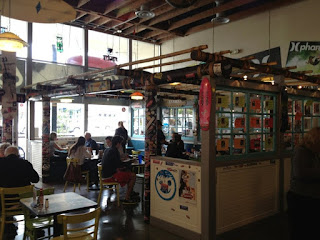 She said it was like the time she was in Washington Heights in NYC and walked into a park and saw a party of people dancing in costumes from 200 years ago. She said they then suddenly disappeared - she was glimpsing something outside of time.

Looking at this photo of a customer on the wall of photos (our kids are there somewhere) she suddenly flashed back in time before the restaurant had been remodeled. (The old Santa Monica "Wahoo's") she could see everyone in the restaurant from back then, like slipping out of time.

When it finished she went to tell the counter woman we've known for decades. She told her about her vision. The woman asked which photo it was.

Sherry pointed to the photo which she'd never seen before. The counter woman gasped and said "that is the photo of our first customer to walk into the restaurant.  I knew him. He died yesterday. "


Sherry said "well he just gave me a vision of how the restaurant looked as he remembered it."