Press Release: "Flipside: A Journey into the Afterlife' purchased by GaiamTV

The 90 minute doc is based on his best-selling book (#1 in its genre at Amazon) “Flipside: A Tourist's Guide on How to Navigate the Afterlife.”  Doc is about the controversial life and work of psychologist Michael Newton (“Journey of Souls”) who claims 7000 of his clients said the same startling things under deep hypnosis about the afterlife during his 30 years of practice prior to publishing in ‘94.  Martini interviewed Newton, began filming sessions with people under deep hypnosis (4-6 hour sessions) including himself. Doc shows no matter whom he chose to film, from whatever walk of life, religious affiliation or none - subjects said the same things about the journey to the afterlife and our reportedly subsequent return with spiritual guidance, which Newton dubs the life “between lives.” Film covers reincarnation and reasons behind it.

The film travels to India, Tibet, features interviews with a number of Newton trained therapists.   Martini appeared a number of times on George Noory's Coast to Coast radio program, and after his appearance on Noory's “Beyond Belief” (reportedly the 2nd highest rated appearance in the history of the show) Gaiam TV bought rights to the documentary.  “I'm thrilled to be associated with Gaiam” said the veteran filmmaker, who has written and/or directed eight theatricals. “This research is controversial, the results controversial, but amazingly the same, no matter whom I've filmed, or from what background, with a variety of Newton trained therapists. If this research turns out to be replicable in a scientific setting, it will literally change the way we view our journeys together on the planet. And I can't think of a better venue than this spiritual network of GaiamTV.” Based in Colorado, Gaiam TV represents a number of new age films (“What the Bleep Do We Know”) which delve into spiritual arenas. Martini is repped by Joel Gotler at IPG in LA.
Posted by Rich Martini at Thursday, November 21, 2013 No comments:

They've had some problems over at Amazon listing the book, Flipside. Happy to say it's back up and in stock.  So thanks for your patience!

The film "Flipside: A Journey Into the Afterlife" has been sold to Gaiam TV!  Look for it on the "Beyond Belief" website with George Noory.

Here's the link for the book: http://www.amazon.com/FlipSide-Tourists-Guide-Navigate-Afterlife/dp/0970449984 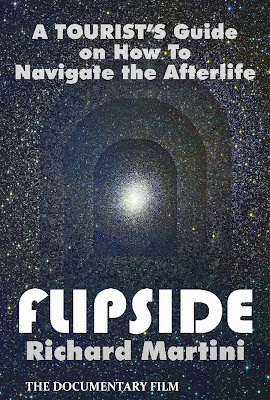 Flipside and over one million other books are available for Amazon Kindle. Learn more

Flip to back Flip to front
Listen Playing... Paused   You're listening to a sample of the Audible audio edition.
Learn more

FlipSide: A Tourist's Guide on How to Navigate the Afterlife Paperback – August 22, 2011

Posted by Rich Martini at Monday, November 18, 2013 No comments: