This is one of those podcasts about process. 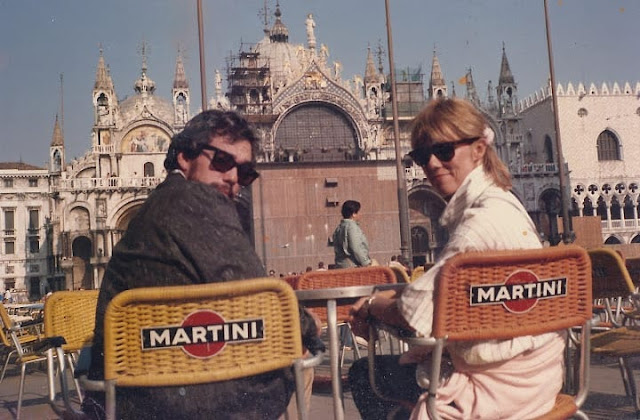 Me and Luana hanging out in Venice
As usual we had nothing on our agenda, but Luana did. At some point she interrupted me (what else is new?) to get Jennifer to say "Luana wants to talk about something."
I know this is problematic for some people. As I note in the podcast, it's not my opinion, theory or belief that I've been filming people for the past ten years accessing the flipside, it's on film.  It's literally footage.
Take a look at the films "Flipside" or "Hacking the Afterlife" on Amazon Prime. To those who have a problem with this process, find your own. People have suggested I interrupt Jennifer too often; my response is, "Sorry. But book your own session with Jennifer and you can do all the non interrupting you want."
We bring this public service to people because it's not hard to speak to loved ones in the after life. Some claim it is - we're showing it's not.  People pretend it is, but if one takes the time to do the research, look at the clinical case studies, look at the research that shows consciousness is not confined to the brain, their adamant refusal to consider it possible is mind bending.  It is possible. One doesn't need a medium, or a hypnotherapist - but both help.
As to why we do this podcast, as Jennifer notes, about 30% of her time speaking to the flipside is in service of law enforcement. She does that work pro bono - for the public good. It's her version of "tithing."
In my case I've been very clear since publishing "Flipside" in 2012. I've been filming people with or without hypnosis since 2008. 100 cases - half without hypnosis. What they say on camera matches the clinical case studies of Dr. Helen Wambach (a clinical psychologist who did 2750 case studies) or Dr. Brian Weiss (has done 4000 case studies) or Michael Newton and the Newton Institute, who have done over 7000 sessions with people. My version of tithing is to post this podcast, over 100's of hours of footage on this webpage at MartiniZone.com on Youtube.
For those adamant skeptics, look at the peer reviewed science from Dr. Greyson's "After" and his comprehensive NDE research, or Dr. Tucker's "Before" and his 1500 cases studies of reincarnation, or Ed Kelly's "Consciousness Unbound" - peer reviewed science citing how consciousness is not confined to the brain. All gave me a tour of UVA's lab at the DOPS part of the Medical School.  It's directly related to why we do this podcast.
Subjective experience can be studied based on the 100's of examples. If everyone said something different, then we'd have the argument of bias, or projection. Having filmed people saying the same things with or without hypnosis, having mediums report the same things with friends of mine, shows that it cannot be cryptomnesia or my projections. (In the film "Talking to Bill Paxton" on Gaia I had three mediums answer the same questions put to Bill, and all said the same answers, including the one who was asked the questions by a third party. (Triple blind study)
The only thing confined to the brain is opinion, cemented in years of people arguing that experiences mean nothing, that events that occur are meaningless without "mainstream science" weighing in. It took 66 years to go from Kitty Hawk to the Moon, not from the scientists who said people would "never escape gravity" or people who claimed flight was impossible.
Science asks two main things; reports must be consistent and reproducible.  It's the basis of all data.  In this case, we are getting a "hack" from someone who left the planet in 1996.  She has made it a point to wrangle me out of my director's chair (I've written and or directed 9 theatrical feature films) and put me into this podcast chair where I have learned more than I ever could have filming people pretend to be someone they are not.
So enjoy the podcast, at the moment it's free, and given with love. Enjoy a little sage advice coming from the flipside.
Posted by Rich Martini at Friday, September 17, 2021 No comments: