Hacking the Afterlife with Jennifer Shaffer and special guests

I've been filming medium Jennifer Shaffer once a week for seven years. It's my own version of Michael Apted's "Up." In this case it's been weekly instead of yearly. You'd think she or I would get bored with doing this. She taps into the flipside, I ask questions - as if she was a dixie cup on a string chatting with those no longer on the planet.
The results are in transcripts in "Backstage Pass to the Flipside" the latest book "Tuning Into the Afterlife" and our podcast "Hacking The Afterlife" on itunes.  Due to the holidaze, we weren't able to work together this week, but I dug up an interesting conversation we had in August of 2019. It relates to how people can access their loved ones on the flipside, or avatars, with or without a medium. 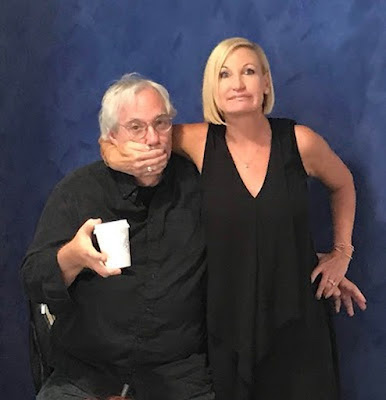 The key is to have an open mind to the possibility.
A chat with Mama Cass, Yogananda, Krishna, Padmasambhava, the Alpha and Omega about how he got that image on the shroud. Mind bending and not for everyone - but pretty much points to the method of how to do the same. As she points out, this kind of investigation won't be appreciated for centuries, but we'll be on the flipside high fiving each other.
As to the comment about "Warren Beatty" being on the flipside and visiting friends over there - We bring a portion of our conscious energy to a lifetime. The rest stays home. We can hang out with, have fun with, party down with our pals on the flipside. We may not be aware of it but they are. Luana, an old friend of Warren's was showing Jennifer that he (his higher self) is hanging around with pals on the flipside. He's got plenty over there, including Harry Dean Stanton. Last time I saw Warren was at Harry Dean's memorial. He's alive and happy and fully in his persona. No need to stress over Warren not being on the planet.
Enjoy. And Happy New Year.
Posted by Rich Martini at Saturday, January 01, 2022