The Hug Heard Around the World

Today my wife was telling me that she reached out to that judge in Texas who hugged the brother of the murdered victim in Dallas.


She saw that people were "going after her" for "hugging the brother of the victim" because law strictly prohibits it.  Further, they went after her for "giving a bible" to the police officer found guilty of the crime.  Apparently the atheists of America are suing the judge. 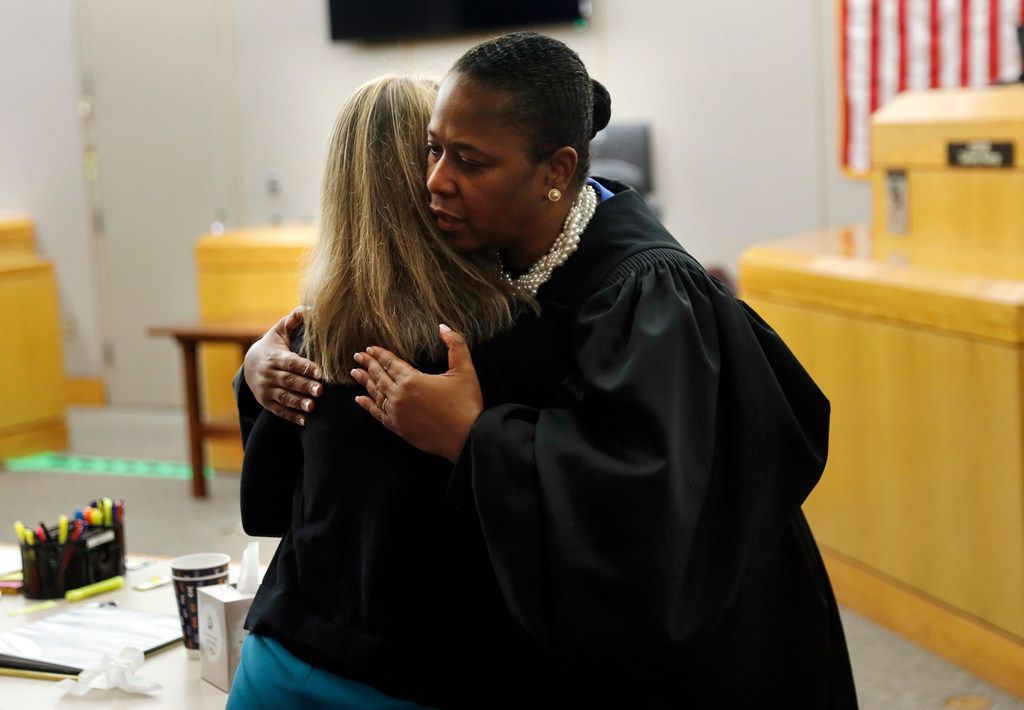 Hang on a cotton picking minute.  (Even that term is rife with prejudice.)

From what I understand, the brother asked twice to hug the police woman who killed his brother (by accident.)  The first time she didn't respond, and the second time she allowed it.  So it's not unprecedented in the annals of justice to allow a victim's kin to address the perpetrator - but in this case a police woman.

She allowed the hug.

Moments of shared humanity captured by a camera.  If the police officer had asked for a copy of the Qur'an it would have been news; but take up the request for reading material with the officer who asked for it.

If you want to thank Judge Tammy Kemp, here's her contact info:

But I'm writing to show how these are moments that have a deeper meaning.

Today, a skeptic was castigating me online for my research into consciousness, saying "There is no physical evidence that consciousness exists outside the brain."

I replied (there is) "Interesting research done by Mario Beauregard PhD ("Brain Wars") using MRI while subject is in a consciousness altered state. (Carmelite nuns having an epiphany, people under hypnosis examining an NDE or past life memory.)
As noted in "Its a Wonderful Afterlife", he found the locations in the brain normally functioning, giving signals were not operating at all during these events. So someone seeing a memory, accessing visions of other worlds registered the opposite during MRI. No activity associated with senses.

By demonstrating no activity during dramatic recall he showed the brain is not creating these events. Further i suggest looking for new information during a consciousness altered event.

If a person learns new information during an NDE, OBE, LSD, under hypnosis- that cant be ascribed to cryptomnesia- then it indicates the information is coming from outside the brain.

There are many things we've yet to measure; dogs smell cancer, bees see UV light, trees communicate through roots. There are frequencies we've yet to understand. The latest research (see Dr Greyson's "Is Consciousness Produced by the Brain?" On YouTube) indicates the brain has filters that prevent our accessing these frequencies. (He cites medical cases where Alzheimer's patients recover just prior to passing)

It appears the brain functions like a receiver. In the 50 cases I've filmed of people under deep hypnosis (and recently without any hypnosis) recalling forensically provable previous lifetimes, encountering new information on the flipside that can't be cryptomnesia, comparing those reports to the 2000 cases of Dr. Helen Wambach and 7000 of Michael Newton, it appears that consciousness functions in a way we have yet to comprehend.

These people claim consistently that we bring "about a third of our conscious energy to a life" and two thirds is always back "home" (their term for afterlife). People who lose or alter the filters on their brain via some consciousness altered event gain acess to the natural state of things.

If they "recover" they return to the illusion of our shared reality. My two cents.


To which the skeptic replied:

"It appears the brain functions like a receiver...".....how is a physical brain able to 'receive' whatever it is.....while scientific apparatus cannot detect whatever is being 'received' ?

"Ask Dr. Greyson. He's the scientist at UVA who brought it to my attention. 100 years ago people were worried about electricity moving through walls. A scientist detected a pulsar's signal and the planet had a panic about messages from outer space.
If you view humans through energy detection its not the brain that appears as the heat source - it's the heart. The frequencies of the heart throw more energy than the brain.

Lets put it this way; I don't think you are asking a question. If you really wanted to understand consciousness or how consciousness functions; it's as simple as asking "does love exist?"

There are no instruments that can measure love. We have no scientific explanation for its existence. Can't measure it, detect it, quantify it. No definition of it exists.

But we know it exists. (And I would suggest that it is literally consciousness.)

Just because there's no mechanism to detect love doesn't mean it doesn't exist.

It's what makes the world go round after all.

Or what allows a Judge in Dallas to allow a fellow human's request to hug a person who desperately needed one.

And finally here's a recent video that explains in detail what I've been talking about. Enjoy.