Robert Beer on the Meaning of Life

Robert Beer on The Meaning of Life


This is the artist who introduced me to the Flipside.  When I met him, thanks to Chuck Tebbetts​, I heard in my ear "He's why you're in London."

I noted the thought, remembered the handshake, scattered some of Luana's ashes behind his home in the Thames. Email pals until six months later, when a tragedy brought me into his orbit.  He suggested I look into Michael Newton's work.

This essay on the "meaning of life" is wonderful, filled with nuance and first hand experience.  If you haven't seen his tibetanart.com​ website, it's breathtaking, like his insight.

His story, and my meeting him, is recounted in the book "Flipside" with a reference to his between life session with a Newton trained therapist in London.  In it, Robert discovers he led a previous lifetime in Boston as a banker in the 1840's. But during the memory, he saw someone he knows from this lifetime.

With the help of this friend of his, we conducted an experiment.  She didn't know anything about his between life memory, or that he had been to a Michael Newton trained hypnotherapist in London.
I arranged for a therapist in NYC to do a session with her; the therapist knew nothing of Robert's session.

In her session, she recalled the same details that Robert had recalled, about their lifetime together back in the 1840's in a city he's never been to, but she currently resides in. Two individuals with different hypnotherapists, recalling the same lifetime with the same details decades apart.

Robert Beer: Life Itself is the Search for Meaning
BY EXCELLENCE REPORTER ON APRIL 4, 2018


Nicolae Tanase: Robert, what is the meaning of life?

Robert Beer: I have come to believe that death alone reveals the true moral and ethical stature of life, and while that life is being lived this issue always hangs in the balance. We are born with amnesia, and develop without recognizing our true innate nature, or the dimensions from which we manifest as eternal beings evolving towards self-perfection. So there is no longer the need to incarnate again with amnesia.

The evidence for the continuity of existence beyond death is overwhelming, if one seriously undertakes to explore the various avenues of research into ‘Non-local Consciousness’ being revealed in our time.

This includes all aspects of parapsychology, quantum mechanics, the evidence derived from universal reincarnation studies, after-death communication, deathbed visions, and near-death experiences. The latter relating to the deep ‘life-review’ component alluded to in my opening sentence.

Plato’s ‘Republic’ records the earliest NDE in the ‘Myth of Er’, and Socrates’ statement that, a life lived without philosophy – an unexamined life – was not worth living. Philosophy, as the ‘love of wisdom’, with its three branches; natural (physics), moral (ethics), and metaphysics (what is beyond physics), is eternally fresh and pregnant with meaning, and to believe that life has no meaning points towards an unexamined life.

So what is the meaning of life? Life itself is the search for meaning, for the cultivation of love, wisdom, compassion, sympathetic joy, equanimity, but not necessarily happiness or pleasure, which are often just intervals between two pains.

To me and at this time of life, this contemporary research has been extremely transformative. ‘There are the learners and the learned, memory makes the one, philosophy the other’ (A. Dumas).

Way back in the 1970’s I came across some graffiti on a London railway bridge, which read: “Death can be god-orgasm if you spend your life in divine foreplay.” I can live with this.

“When at last, in a single flash, you attain to full realization, you will only be realizing the Buddha-nature that has been with you all the time; and by all the foregoing stages you will have added nothing to it at all. You will come to look on those eons of work and achievement as no better than unreal actions performed in a dream. Your true nature is something never lost to you in moments of delusion, nor is it gained at the moment of enlightenment.” 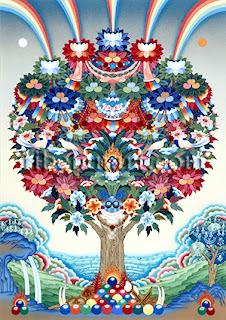 ~Robert Beer first first began to study and practice Tibetan thangka painting in India and Nepal between 1970-76, and was one of the first westerners to become actively involved in this field.

Since then he has devoted most of his life to studying the iconography and symbolism of Indo-Tibetan Vajrayana Buddhist deities. Over the past twenty years he has been actively involved with some of the finest contemporary Newar artists of the Kathmandu Valley, and has assembled a unique collection of their work. 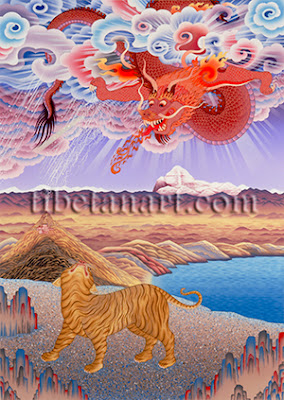 Apart from his continuing work with Indo-Tibetan iconography, he is also deeply involved in researching all aspects of the afterlife, especially the enhanced consciousness and enduring transformative effects of the near-death experience.

His illustrations have been published and widely ‘pirated’ in hundreds of books and websites, and he is the author and illustrator of The Encyclopedia of Tibetan Symbols and Motifs, and The Handbook of Tibetan Buddhist Symbols.

Posted by Rich Martini at Wednesday, April 04, 2018 No comments: