Two Thumbs Up For Roger 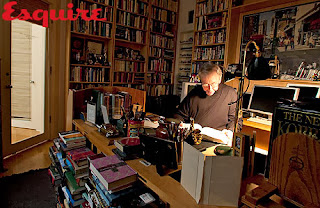 Here's a pretty dramatic "Flipside" moment, and I will endeavor to interview Chaz Ebert about it for the next book. I knew Roger Ebert, my brother Jeff worked with him at the U of I on the school paper, and Roger had given me a brutal "thumbs way down" review of my film "Limit Up" which literally killed it while it was in the theaters. I thought he'd appreciate the story about a guardian angel who helps a woman become the first female soybean trader at the Chicago Board of Trade and Ray Charles played her boss, God; I had no idea he was an atheist when I insisted to the studio that they get Roger a copy of the film for his review. One of the many errors I've made in my film career. (No really, it's a fun movie; Danitra Vance, Ray Charles, Brad Hall, Nancy Allen - just hard to find.)

However, he was always friendly when I saw him at Cannes or other fests. I met his wife Chaz a few years back as well - a lovely couple. So when he was pronounced dead and then revived some years ago, he wrote how Chaz reported she heard him saying "I'm still here." She insisted the Doctors revive him - and they did. He went on to live another four or five years with her. It didn't change Roger's opinion of an "afterlife" as he wrote a column about what happened - how he wasn't conscious of calling out to her, but she was. I noted how funny it was that the proof there is "consciousness after life" actually happened to him - and to the person he loved the most on the planet - but he was blind to it. And six days ago, this appeared in Esquire, Chaz's recollection of his final days. He was experiencing what so many have experienced - some in near death experiences - and some while under deep hypnosis as pioneered by Michael Newton and outlined in my first book "Flipside."

Take a moment to read this description of Roger's last moments on the planet. "The one thing people might be surprised about Roger said that he didn't know if he could believe in God. He had his doubts. But toward the end, something really interesting happened. That week before Roger passed away, I would see him and he would talk about having visited this other place. I thought he was hallucinating. I thought they were giving him too much medication. But the day before he passed away, he wrote me a note: "This is all an elaborate hoax." I asked him, "What's a hoax?" And he was talking about this world, this place. He said it was all an illusion. I thought he was just confused. But he was not confused. He wasn't visiting heaven, not the way we think of heaven. He described it as a vastness that you can't even imagine. It was a place where the past, present, and future were happening all at once. (http://www.esquire.com/blogs/news/roger-ebert-final-moments)

Funny how he reviewed his glimpse of the nature of reality; "It's all a hoax." He could have said "It's all a movie" or "It's all a theatrical piece" which would have been a bit more accurate (according to the research). "Hoax" implies there's someone behind the curtain pulling the strings, and pulling something over on people. "Illusion" is accurate, but again, so is film; funny he didn't make that connection. But when you examine the "Flipside" you find that there's no one but you pulling the strings - albeit with help from spirit guides and other resources - but we experience events and problems in our paths because we put them there, to examine them, to learn from them - to learn compassion for others. We are directing the hoax, so to speak, and when we experience the vastness, the "stepping outside of time" that one can experience during a near death experience or under deep hypnosis, we see the past, present and future as other events to experience. And we experience the vastness, as Eben Alexander did in "Proof of Heaven" as a "glittering darkness" where we are all connected at the same moment. But don't take my word for it; take Roger's. Two thumbs way up.

Posted by Rich Martini at Monday, December 30, 2013 No comments: Links to this post