Flipside: The Veil is Thinning

Flipside 2 update - "The Veil is thinning"Interviewed Dr. Mario Beauregard today at his home in Montreal. Dr. Beauregard, author of "Brain Wars" is a neuroscientist on the forefront of "post materialist science." He credits William James as the father of this branch of modern psychology (as opposed to the "materialist science" that believes consciousness only exists inside the brain). Dr. Beauregard has gathered numerous case studies in "Brain Wars" and his new book, and he cited over 100 where people were clinically dead, and were still hearing, observing and participating in the world we inhabit while supposedly "clinically dead." In essence his research proves (from a scientific basis at least), that consciousness indeed can exist outside of the brain's ability to function. His peer reviewed ground-breaking study of Carmelite nuns proved that there is no "god spot" in the brain - as their results showed that religious experiences are recorded in many different parts of the brain. 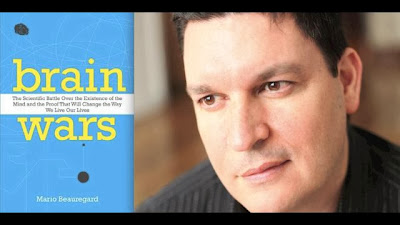 Meanwhile have continued transcribing amazing between life sessions - (sessions are based on work and research in Michael Newton's "Journey of Souls") - I've filmed over 20 people under deep hypnosis, and collected accounts of NDE's and other phenomena. These people under deep hypnosis claim to have experienced their life's purpose and met and connected with loved ones who've died - these sessions are remarkably similar to clinical accounts of near death experiences, or NDE's.

Today I was transcribing footage I'd shot of a woman with fairly severe Parkinson's during a session- an illness that has knocked her off her career path with its constant phsyical tics and involuntary body movements. However, when she was able to "travel" to the deepest recess of her subconscious, and recall her between life arena during the session, the camera recorded that for an hour and twenty minutes she was completely still, save for her thumb tapping a rhythm to what she was saying about her journey in this lifetime. In essence, her Parkinson's stopped completely, and the camera recorded it. If it's possible to stop the involuntary movements in this form of therapy, what other illnesses and body ailments could be treated in this fashion?

When I aksed Dr. Beauregard why he thinks this research is coming to the forefront showing that consciousness may exist outside the brain, and how more revelations seem to be coming on a daily basis about the nature of consciousness, he smiled and said "I think you're right, Richard. I think it's because the veil is thinning."

I appreciate all of you who've helped me to raise funds needed to continue this research. If you'd like you can order your advanced copy now, please make a donation of whatever amount you can. Happy holidays to you and yours, and those who no longer are on the planet as well!

Posted by Rich Martini at Wednesday, December 18, 2013 No comments: