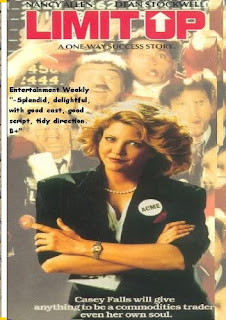 I made this film in 1989.   The other day, a technician at a lab and I were chatting about it, and he asked to see it.  He's 26, African American, grew up in the projects and made his way to LA.  I gave him a copy and he raved about it; he wants to show it to his church, he wants to show it to his pastor father in law; he wants everyone in his life to see it.  Needless to say, I was moved.  Twenty years ago, a group of people came together to make a little fable about capitalism, about how hard it was for a woman to become a soybean trader at the Chicago board of trade, about racism. The cast includes the amazing Danitra Vance (Colored Girls on Broadway in the 70's), who plays the guardian angel of Nancy Allen.  Ray Charles plays God.  It's a paean to Chicago, an homage to the soybean pit where my brother toiled for many years.  The original cast was Daymon Wayans and Sharon Stone, but the producer wouldn't let me cast them.  Either way, it's a PG13 family flick, Brad Hall, Ron Howard's dad Rance are hilarious - Dean Stockwell, Nancy Allen are a hoot - "cornball" as Ebert puts it, but hey, something to be said for the only film ever made about soybean trading.. I still have no idea why anyone would hate this film.  Entertainment Weekly gave it a B+ - but sadly, it's disappeared into the great cinema vault in the sky.

Here's a clip I put on youtube of Danitra and Ray in the final scene, sadly, both not on the planet anymore:

Here's a clip from the ending with Danitra and Ray:http://www.youtube.com/watch?v=zhQzQ3opivE

Reviewed by Cynthia Grisolia | May 04, 1990
Who would have thought that someone could make a feature film about a subject as unsexy as soybeans and it could turn out to be as charming as this.

Limit Up stars cherubic Nancy Allen (who shifted from sexpot to Kewpie doll somewhere between Dressed to Kill and Robocop) as Casey Falls, a ''runner'' on the floor of Chicago's Midwest Grain Exchange, where traders, in a wild jitterbug of coded hand signals and general pandemonium, control the output of America's No. 1 cash export: soybeans.
In a facetious bending of the Faust tale, Casey sells her soul to a delegate from the devil (Danitra Vance, in a role undoubtedly written for Whoopi Goldberg), and soon is rolling in high-protein dough.
If you're thinking of stopping here because you've heard this before, don't. Limit Up may have an oddly misleading title (''limit up'' is commodity-trader jargon indicating prices are frozen and trading has stopped), but it's really a splendid comedy with just enough corkscrew turns and wry jokes to make thisfaux Faust pretty sprightly.
All the elements are here: good cast, good script, tidy direction, and an ending that's sunny but not so much that it will make skeptics gag. And Allen is particularly delightful as the ambitious trader forced to make a tough decision when her marker comes due. Also, look for Ray Charles in a small but significant role and a cameo by Sally Kellerman.
Posted by Rich Martini at Wednesday, January 05, 2011 4 comments: Links to this post

Another Tibetan tortured for being Tibetan

[Thursday, 30 December 2010, 6:07 p.m.]
DHARAMSHALA: A Tibetan political prisoner named Jigme Gyatso serving a 17-year long prison sentence in Chushul prison near Tibet's capital Lhasa is in critical health condition due to severe torture, according to a report received by the Central Tibetan Administration.

In 1996, the Intermediate People's Court in Lhasa levelled alleged charges of counter revolutionary activities against Jigme Gyatso along with a group of Tibetan residents of Lhasa. Jigme Gyatso was subsequently locked up in Drachi prison to serve a 15 year jail term with hard labour.

While in prison, Jigme raised slogans of His Holiness the Dalai Lama's long life which resulted in a 2-year extension of his incarceration. Nevertheless, he remained firm in his resolve for which he was severely tortured and beaten up rendering him physically very weak.

The severe beatings continued after he was shifted from Drapchi to Chusul prison and presently his survival is on stake due to the debilitating health condition.

Jigme was born in 1961 in Sangchu in Tibet's Amdo Province.

He used to live in Lhasa before the arrest and his mother passed away two years after he was arrested.

He was one of the first Tibetans who worked for the just cause of Tibet in Sanghcu, Ladrang in Amdo Province. During his stay in Lhasa he joined Tibetan friends and dedicated sincere efforts in number of activities for Tibet.

Notwithstanding physical weakness caused by beatings under the Chinese government's captivity, many Tibetans like Jigme have kept up their spirit of determination and courage to brave the repression.


FOR SOME EXCERPTS FROM MY DOC http://www.youtube.com/watch?v=4g9PurojxAU
Posted by Rich Martini at Sunday, January 02, 2011 No comments: Links to this post