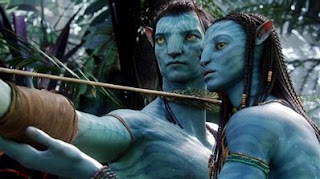 The beautiful alien planet Pandora depicted in James Cameron's 'Avatar' is so captivating that some audience members are becoming depressed and even suicidal when they fail to find meaning in real life after the film is over.
Writes Jo Piazza for CNN.com:
On the fan forum site "Avatar Forums," a topic thread entitled "Ways to cope with the depression of the dream of Pandora being intangible," has received more than 1,000 posts from people experiencing depression and fans trying to help them cope. The topic became so popular last month that forum administrator Philippe Baghdassarian had to create a second thread so people could continue to post their confused feelings about the movie...

I'm concerned about these posts about depression for not being able to live as they do on Avatar's Pandora.  I'm a filmmaker, have been researching reincarnation via a documentary ("Over the Rainbow - a tourist's guide the Great Beyond") for the past couple of years, and have been particularly focusing on the work of Michael Newton (Journey of Souls). I was pleased (amazed, astounded) seeing that the Pandora world as depicted in Avatar echoes of what people under hypnosis describe as the "Life Between Lives" or the Afterlife. For those folks who've become depressed, I highly recommend checking out his work, there are interviews with him on youtube, and a number of other hypnotherapists have come to the same conclusions that his 7000 documented patients have come to - that the universe is all energy, that every living thing, every object contains energy, and that its all part of an ecosystem that nature (or God, or whomever) has constructed so that we're all connected at all times.  Avatar like worlds (realms, planes) have been reported from various people under hypnosis - other realms, or planets where we supposedly reincarnate between journeys to Earth.  I don't know if any of this is real or accurate, I can only report that the end result is that people who've gone on these journeys have the profound feeling that they actually have gone on them - the affect is the same.  So if you'd like to visit Pandora, visit a trained hypnotherapist near you (I'm not selling anything, you can google him and find these same details), and happy voyages!